Over the last several years, I’ve had European and Indian friends at work whom I’ve been bursting to share my appreciation for baseball with, but have struggled to articulate what makes the game so great. Sometimes I’ve been able to take them to a game, but even then (especially when you have to take them to see the Braves or the Giants) all the best pieces don’t necessarily come out. So, I’ve decided to write a 4 or 5 part guide, hopefully easy to read and digest.

To start with a rundown of all the rules would be boring and missing the heart of what the game is about, so instead I shall start with the central drama of the game: the duel between pitcher and batter.

In the above photo, the pitcher is the one closest to the camera, standing 60 feet away from home plate. The batter stands to one side or the other of the plate, a catcher squats behind home plate, and a referee (called an umpire in baseball) stands behind the catcher. The pitcher begins the action by throwing the ball to the catcher (called a pitch).

Some of these blocks bear explanation. 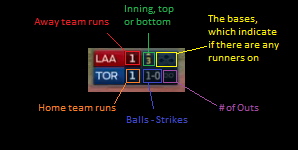 The strike zone is (roughly) a rectangle suspended over home plate (pictured below from the top down), which extends from the batters knees to about the middle of his torso, with the left and right extents matching the left and right bounds of the plate. I say roughly, because while there is a precise definition of the strike zone, it depends on a human eye (the umpire’s) to declare whether a pitch actually passed through the strike zone or not. Not surprisingly, they can be quite inaccurate at times. Many times these days, broadcasts will include a CG-imposed outline of the strike zone for viewers to use to complain about the umpires.

For the purposes of this explanation, the only thing that matters is the lines extending left and right from home plate at a 90 degree angle: the foul lines. Though there a few complexities to the rule, generally any ball struck by the batter that lands outside of this 90 degree wedge is foul, and those that land within are fair.

So there you have it–the center piece of a baseball game. This post hasn’t touched at all about strategy, or what goes on once the ball is in play, or the number of outs or innings, or even how to score points. No matter: while those other parts make up most of the excitement, the drama of man vs. man, pitcher vs. batter, is the fundamental way the game builds tension to make the rest of the game pay off.